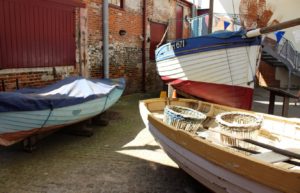 As part of an Esmee Fairburn funded project ‘Sea History Differently’ at Time and Tide Museum in Gt Yarmouth, the three boats in the museum’s courtyard underwent a conservation project involving the community between June and September 2017.

The three vessels are the ‘Coronation’ a Yarmouth shrimper, built in 1903, and two beach skiffs, ‘Shipmates’ and ‘Grace’ built in 1910 and 1914, all built in Yarmouth.

The boats were installed when the museum opened in 2004 and apart from some basic maintenance, were overdue for a thorough assessment and further treatment. It was also hoped that this would lead to a long term and sustainable maintenance plan.

The condition between the 3 boats was quite varied. Some of the paint layers were still firmly adhered, whilst others were very badly flaking and separating from the surface of the boat. This, combined with dirt and debris trapped beneath the paint for many years, had the potential to hold moisture and cause future problems for the wood structure.

A specialist maritime collections conservator led the treatment process, working with our NMS objects conservator. A small group of volunteers, recruited locally in Gt Yarmouth by the project team, would help and work alongside, gaining valuable and transferable skills.

The conservation approach to objects in an outdoor environment with limited shelter from the weather, obviously has to be more robust than for collections in a museum showcase ! Much of the process had similarities to those methods employed in a marine boat yard and included scraping off flaking and loose paint, removing any areas of rotten wood and remaking with new wood.The use of a conservation approved acrylic resin for gap filling was a deviation from the traditional methods. Surfaces were rubbed down before primer, undercoat and top coats of carefully chosen paint were applied.

All the conservation work was carried out in view of the public, which provided the opportunity for valuable engagement with visitors. The recruitment of volunteers in the area which has such strong maritime activities, who would hopefully want to invest time in the future to help care for the boats, was an interesting process. Building on existing community knowledge, skills and experience in the care of heritage is an area for future development. 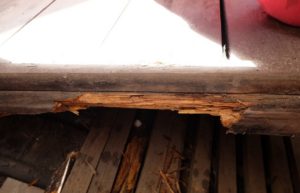 An area of rotten wood on ‘Coronation’ 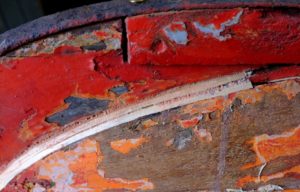 An area of loss filled with new wood and acrylic resin. 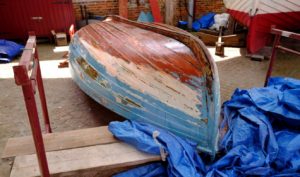 The upturned beach skiff ‘Grace’ with primer and ready to paint 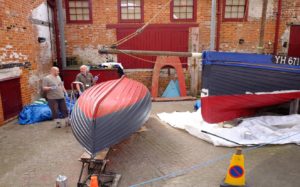 Applying undercoat to the underside of ‘Grace’ 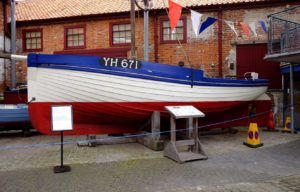 The ‘Coronation’ Shrimper with its final coats of paint