Mummies on the Move 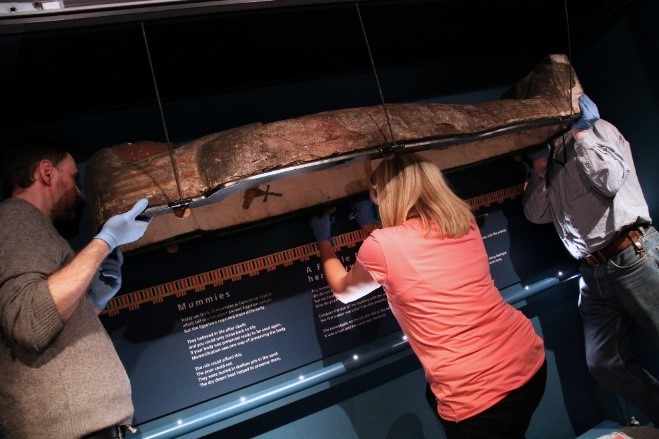 The relocation of the Norwich Castle Museum Egyptian collection began as a simple decant project to safe guard the objects during the Keep Project building works. The Egyptian gallery may in the end, be relatively unaffected by the Keep redevelopment. But building works are unpredictable, especially in such a complex historic space. This, combined with the fact that the display is now almost twenty years old and the material incredibly vulnerable, led to the decision to completely decant the gallery thus avoiding potential issues such as vibration and access.

However, we knew what a disappointment it would be to our visitors and the learning programme if the Egyptian collection was hidden away for the next 18 months over the duration of the project. During preliminary discussions, we considered the possibility of a temporary storage display scenario which would allow visitors to still see the Egyptian collection. We thought the large costume case in the Arts of Living Gallery might provide the perfect temporary home due to its size and stable internal environment. With this gallery destined to become the new temporary entrance for the Castle Museum, this seemed like a fantastic solution to our storage dilemma. It meant keeping our Egyptian learning offer open to schools, and the public would still be able to see a much-loved display. The idea was welcomed by Collections Management and Senior Curators Francesca Vanke who curates the Arts of Living Gallery, and Ruth Battersby Tooke, who curates the costume case. 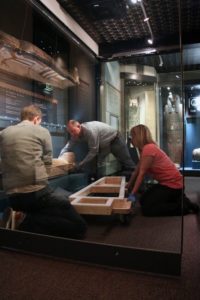 Removing the mummies from the showcase on a purpose built stretcher

The Conservation and Design & Technical team have already had a great deal of experience handling and relocating the mummies, firstly in 1999, when they were removed from the Keep balcony after many decades on display plus a trip to the hospital for x-radiography in 2000 and secondly, in 2011 when they had to be removed for research and photography during a project led by research fellow, Faye Kalloniatis. The mummies and the collection were fully photographed in 2011 for a catalogue which launches this October. 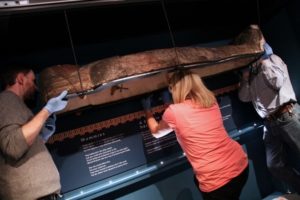 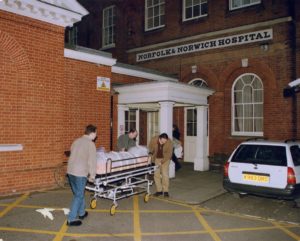 There have been various reinventions of the Egyptian display since the 1890’s and the coffins have suffered considerably over the 100 years they have been on display. This is particularly evident by the damage incurred to their feet caused by the pressure sustained over a long period of time standing upright. Moving the mummies requires careful handling and a strategic operation due to their incredibly vulnerable condition, they are 2,500 years old after all! They are also much heavier than one might imagine and contain human remains which necessitates a sensitive approach. As always, our Design and Technical department appreciated the sensitive nature of the objects and their requirements and seized the opportunity to design a new temporary display.