Hopefully, you will have had a chance to visit ‘The Paston Treasure: Riches of the known world’. This blockbuster exhibition was formed in partnership with the Centre for British Art in Yale Connecticut, who had their own Paston Treasure exhibition prior to ours, entitled ‘Microcosm of the known world’. It featured many of our star objects, such as the Ashwellthorpe triptych, a 17th century bearing cloth made from crimson silk velvet decorated with gold and silver lace and silver spangles (early version of sequins), a magnificent strombus shell cup and of course the Paston Treasure painting itself.

Before any loans could be transported to Yale, they all underwent thorough examination, photography and conservation treatment to ensure they were in a suitable condition for travel and display.  Detailed condition reports were also produced by NMS conservators to enable both Yale and NMS to check that the objects arrived in the same condition as when they left.

The task of getting these wonderful, but incredibly vulnerable objects on display in the USA required a great deal of planning and consideration. Methods of transport had to be agreed upon, ferry or train? Cargo or combi-plane? Specialist packing crates were required. Customs and security implications all needed to be thought through, and all of it had to fit into the tight schedule of an exhibition install. In addition to the work of the exhibitions officer and conservators, many of these logistical problems are dealt with by specialist art moving companies, in this instance, it was Constantine Ltd. But to ensure the safe travel and installation of such a complex loan, a conservator from NMS was sent to courier the objects.

International couriering often sounds like a wonderful and enviable all-expenses paid adventure. This is partially true. There are always chances to see behind the scenes of different institutions, opportunistic trips out to see local sights and often fascinating glimpses into how cargo really gets from one place to another. But these are just a very small part of what is often a fairly arduous endeavour. For a complex loan such as this, involving different materials and large and vulnerable objects, there is a lot to consider. Other than the obvious travelling, late nights and early starts, there’s a huge amount of responsibility, paperwork, waiting in airports, cargo bays and queuing in trucks. However, the travelling and waiting around does sometimes get punctuated by interesting or entertaining incidences. During the Paston couriering, one learnt where the axes and rappelling ropes are kept in a cargo plane cockpit, just in case you have to abseil out of a hatch in the ceiling after an emergency landing!  A late night time journey through illuminated New York was a magical interlude highlight. 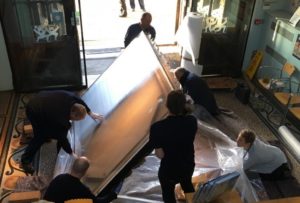 The Paston Treasure being packed for transport in the Castle Museum 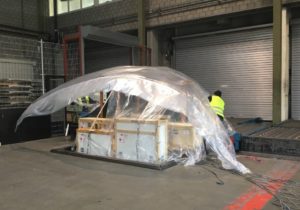 The crated loans being palletised at Schipol Airport

Opportunity to take a break on the Yale campus 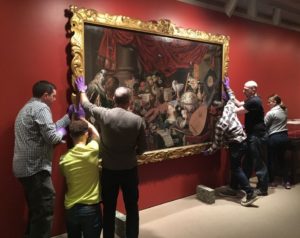