Regularly in the course of our work as conservators, opportunities arise to research and discover new and improved methods and materials for conservation challenges, which can be shared across the conservation community. In October last year, conservators Jonathan Clark and Deborah Phipps attended a 3 day international conference held at The Emmanuel Centre in London, titled, Gels in Conservation which was organised by International Academic Projects, in association with the Tate. The conference gathered conservators, and conservation scientists from across the globe to present and discuss the theory and practical use of gels in various disciplines of conservation including paintings, paper, wall paintings, textiles and objects. Jonathan and Deborah submitted a poster outlining a specific project they had undertaken involving the use of solvent gels on a ship wrecked hat. As a result, Jonathan was invited to deliver a presentation as well.  The conference included an international audience of conservation peers from institutions such as the Metropolitan Museum New York, the J. Paul Getty Museum LA and the Munch Museum Oslo. 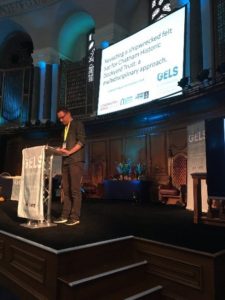 The case study looked at the treatment of a shipwrecked felt hat for exhibition at Chatham Historic Dockyards called ‘Command of the Oceans’. In 2015 NMS Conservation Department won a tender to prepare all the material for the display, which included copper alloy cauldrons, tankards, buckets, barrels and cartridges, woollen socks, a silk neckerchief, a syringe and even lumps of coal. These objects were all lifted in the early 1980s, from the wreck of 74 gun flagship ‘The Invincible’ which, in 1758, sank off the Solent. One of the objects was thought to be unusable for either display or interpretation due to a rather unsympathetic conservation treatment carried out in the 1980s. The object, a brown felted soldier’s hat had been lined with layers of synthetic paper like material, adhered with copious quantiles of an adhesive, and had been gap filled with thick painted cardboard and felt patches. This resulted in a misshapen and distorted appearance. 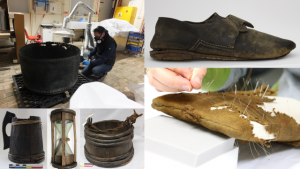 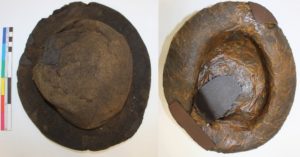 To remove this lining, without damaging the vulnerable felt, solvents suspended in a gel were used. The idea to use gels came from their application on an entirely different object, a medieval polychrome altarpiece destined for display in the Castle Keep. On this project, a variety of solvent gels have been used to soften overpaint and thick yellowed varnishes, allowing them to be removed with swabs, and scalpels. Gels provide the advantage of controlled and prolonged exposure to moisture or solvents, which in the case of the hat, allowed us to start removing the old lining, layer by layer. Once the lining and old gap fills had been removed, the hat could then be carefully reshaped and placed on a bespoke mount.

The treatment of the hat has resulted in an accessible, stable and hopefully historically accurate object, which rather than languishing in a store is now an actively used part of collection to help tell the story of the Invincible. 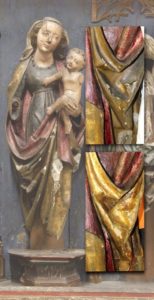 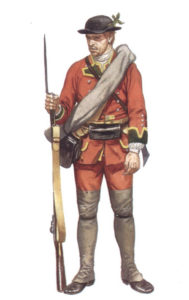 A soldier from the 55th Regiment of Foot, circa 1758, wearing a similar felt hat 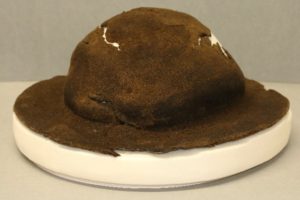 The finished felt hat after removal of the lining, reshaping and mounting