A tablecloth with a difference 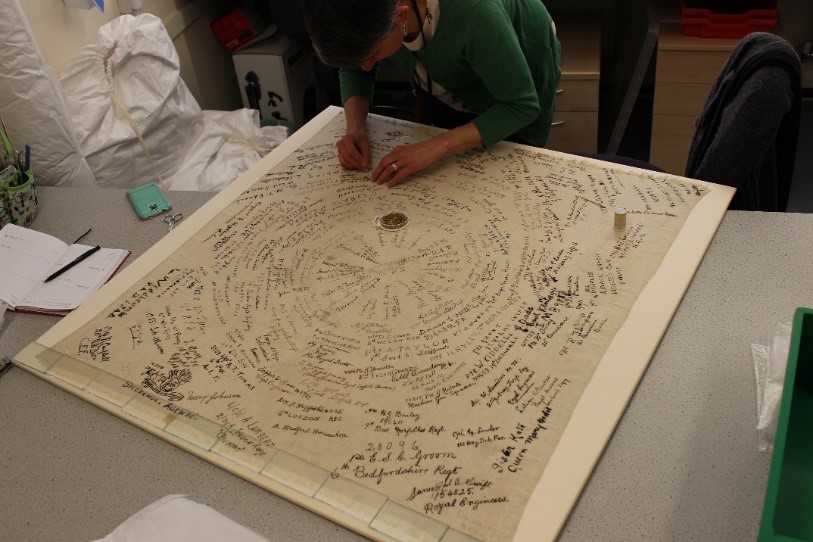 As well as our core work for the Museums Service, Conservation are often approached by members of the public to conserve, repair and transform precious heirlooms and personal possessions.

Recently, one such object was an interesting discovery that had been stored away for many years, a three-foot square textile with ink signatures on it. Along with colleagues in Design and Technical, we were asked to conserve, mount and frame the textile. The custodian of the object from the Harleston & District Branch of the Royal British Legion, had carried out extensive research on the item which turned out to be a tablecloth signed by 104 soldiers from WWI. The soldiers, some international, had stayed at the two Red Cross hospitals in Harleston between 1914-1918. In the centre of the tablecloth, are another 40 names believed to be of the medical staff and others who had worked at the hospitals.

The object was in a surprisingly good condition albeit nearly 100 years old. Most of the ink signatures appeared to be stable, although there were some areas where the iron gall ink had disappeared completely.

As the tablecloth had been folded for some time, we laid it out to let it relax before adding some glass weights to help remove the creases. In the meantime, a large archival support board was created and covered with conservation grade fabrics to provide cushioning and to enable us to stitch the object on to. Due to the textiles’ large size, many pins were needed to secure it to the board before any stitching could take place. An ash wood frame was made and oiled, and non-reflective glass was used for glazing to complete the framing.

The conserved and framed tablecloth caused quite a stir in Harleston, especially as some of the names could be traced and related to local business people still trading in the town. Hopefully the conservation treatment carried out will prolong the life of the object for another 100 years to come!

For further information and to see the list of names, visit http://branches.britishlegion.org.uk/branches/harleston/ww1-tablecloth 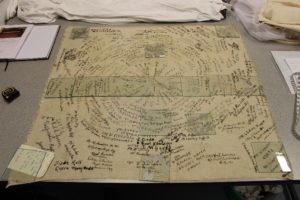 WW1 Tablecloth removal of crease with the help of glass weights 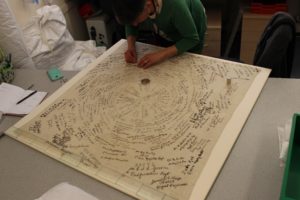 Stitching object onto the board 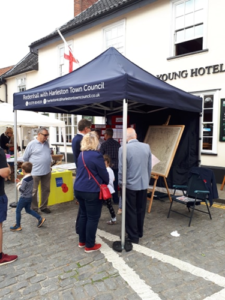 On display in Harleston after treatment